How Your Code Slows As Data Grows

Knowing how complicated a task is will be an important factor in deciding whether the task is worth doing to achieve some outcome. Similarly, knowing how complicated an algorithm is will be a strong indicator of whether to use it or not to achieve some outcome. In our day-to-day life, we might decide how complex a task is based on how much time it will take, how far do I have to travel, do I have the money and resources for this task, etc. How do we decide how complex an algorithm is? We use the Big O Notation for that.

Firstly, the Big O notation is just a notation. Don’t be confused by the parenthesis that makes it read like a function. The O stands for “order of”. Think of it as a label attached to an algorithm to describe how fast the algorithm grows.

Think of f(n) and g(n) as the running times of two algorithms on inputs of size n.

f = O(g) means that f does not grow faster than g.

Abstracting away the implementation details

When we program an algorithm and actually run it on a computer, it is very difficult to determine the exact number of instructions or machine cycles that will be executed by the processor. Looking at the source code does not help. This is because there are too many external factors like hardware, software, and programming-language specifics that affect the actual time (in seconds) for a program to run.

We can abstract away from these implementation specifics to simplify how we reason about an algorithm’s complexity. So we express the algorithm’s running time in terms of the basic computer steps.

Say an algorithm has 5n2+10n+3 basic steps on an input of size n. So the running time can be expressed as a function of the input size i.e. f(n)=5n2+10n+3. As n -> ∞ the highest order term will determine the rate of growth of the algorithm’s run time. So the lower order terms and coefficients become negligible. We can say, that f=O(n^2), said as “f is big oh of n square”. 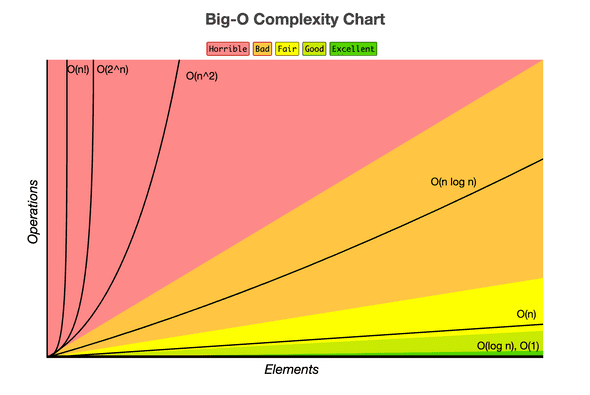 For instance, a linear search task with O(n) time complexity and a sorting task with a worst-case complexity of O(n2). We still have only one week and the same processing power for any algorithmic task. The maximum input size that can be processed by any algorithm in a week is shown in the following table.

In a week we can only solve the set cover problem for an input size of n = 29. Such is the curse of exponential time complexity.